Dividend Aristocrat Lowe's Companies surprised many investors last week by not raising its dividend. Instead of announcing its annual increase the home improvement company will pay a 55 cent dividend for the fifth consecutive quarter.

Like many other US companies Lowe's seems to have postponed its annual dividend increase because of the COVID-19 pandemic.

Normally, Lowe's always increased the dividend after four quarters around this time. This year, the company appears to have postponed the dividend hike, following many other publicly traded U.S. companies. Another Dividend Aristocrat that did not announce its annual dividend hike earlier this year is oil major Exxon Mobil (XOM).

In 2019 Lowe's increased the quarterly dividend by 14.6 percent to $0.55 per share, marking the 58th consecutive year of dividend increases by the proud Dividend Aristocrat. It goes without saying that Lowe's will most likely announce a higher dividend later this year, notwithstanding the fact that the stock hit its all-time high this week after an unprecedented strong recovery from its low point just over two months ago.

DOUBLE DIGIT DIVIDEND GROWTH FOR TEN STRAIGHT YEARS
Apart from the fact that the Lowe´s share is at its highest price ever, investors will also be surprised at the absence of a dividend increase, given the very strong and consistent dividend growth of this Dividend Aristocrat in recent years.

In addition to paying out dividends, Lowe's is also known for buying back own shares. An important part of the free cash flow goes annually to buybacks. For example, according to our calculations, in 2019 a total of 4.8% of the number of outstanding shares was purchased by Lowe's, which so far repurchased 1.5% of its own shares in 2020 (reference date 1 May). 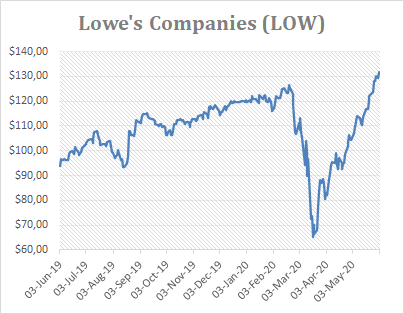 Due to the very strong price increase in recent weeks, the dividend yield has fallen to 1.7% at a current stock price of $ 128.68. The crazy thing is that Lowe's stock slipped to a low of exactly $ 60 on March 19 (see chart above) when the COVID-19 panic was highest among investors. Since then, there has been a massive recovery and it even hit a new all-time high of $ 133.39 yesterday, on June 3. We are convinced that Lowe's will increase the dividend for the 59th consecutive year later this year. Lowe's Companies has been paying a dividend to shareholders every year since its IPO in 1961.

24 January IBM is added to Dividend Aristocrats Index in 2021